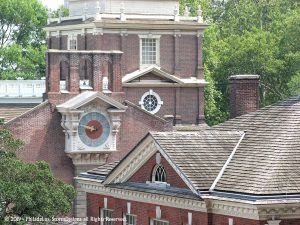 Not by any means-

This is where “it” happened. This great city is where the ideals of our democratic republic were penned and signed. What happened in the “city of brother love” was extraordinary. Philly is a city where people from all over the world came together in a strange foreign land and learned to get along. It's not easy and not always pretty, but we're gritty and we get the job done. The ancient greek inspiration for the word "Philadelphia" is, after all, the city of brotherly love. So there it is, right?

Not the largest city, not the richest city, not the warmest, coldest, certainly not the best beaches but Philadelphia has something else. And because of that, some of mankind's great philosophical epiphanies took place  in this town.

The city where the world changed... Somewhere between the Wall Street world of New  York and the DC Halls of Congress is "We the People" and to this day we must stride always to preserve OUR democracy. Philadelphia has long been Ground Zero for this activity.

The photograph on this page is the clock face  on Independence Hall. That building is where WE first declared our rights to own our government rather than the other way around! No big deal?

Don't take it for granted or that disappears as soon as the Oligarchs can get away with it and they are working diligently. Thomas Jefferson, James Madison, John Adams, Benjamin Franklin and even George Washington walked the streets of this and risked their very (Elite) lives so that the common man can have a say in public decisions.

Let's build this, to honor them!